I have been woefully neglectful of my blogging but then again I have only been creating in my head!  But I did make two fashion totes to donate to an auction recently.  Please see them below: 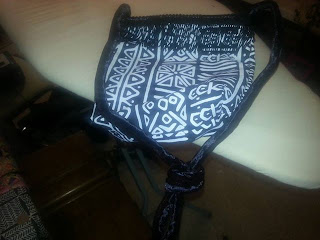 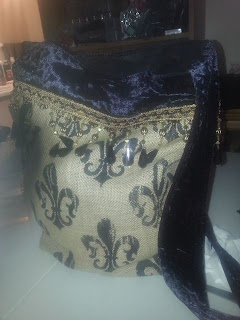 One is made from a faux mudcloth that I bought at Joann's quite awhile ago. I liked it so much I bought the remainder of the bolt.  This is my first time using it.  The other is a printed burlap that I also got from Joann's and I paired it with velvet and a fancy fringe trim because I thought it was a great contract.  They are both lined with black linen.   I did not use a pattern I just created it as I went.  I have another piece of the burlap that is printed in a French Theme with little Eiffel towers and other French themed items.   I will use that to make a bag for myself.  I really like the velvet and burlap look.
Posted by Willa at 4:51 PM 1 comment:

Still crazy after all these....

I have not been able to do much sewing but I finally started on my daughter's wedding crazyquilt.  I have been collecting fabrics for ..well... she has been married for almost 9 years(in Feb). So I got seven blocks done today for the CQJP 2013.  Only 5 more to piece.  I will post the rest later. 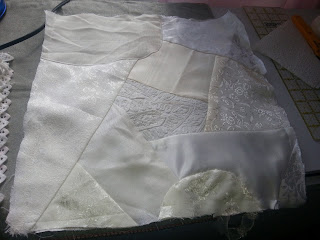 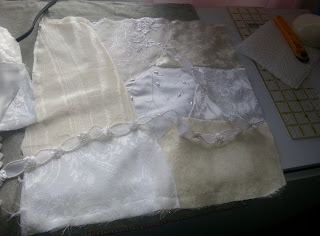 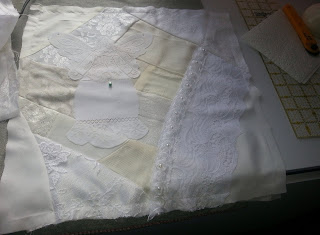 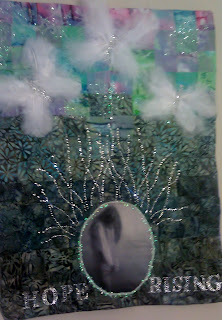 This is an assignment for  a class I am taking in graduate school.  NO it is not an art class or a sewing class it is a course in nursing. We were assigned to do an aesthetic project based on a caring situation in our nursing practice.  This is based on a patient I had many years ago who was told she could never be a nurse because of her injuries. I spoke to her at length about not accepting that diagnosis and to create her own future.  Other nurses followed suit and a few years later, I was the speaker at her nursing pinning ceremony quite serendipitously!  She became a critical care nurse and her injuries were not an issue.  The piece is called Hope Rising and is based on the Emily Dickinson poem,  Hope is the Thing with Feathers.
Posted by Willa at 12:18 PM 9 comments: 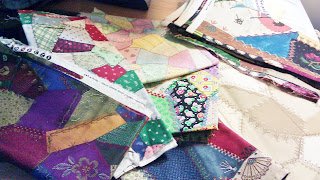 Since I moved and started back in grad school mode, I have been way behind. So today as I continue to unpack and organize, I found these "faux crazy" fabrics. I buy a bit of them every time I find them thanks to Carole Samples who showed me the first one I ever saw.
Posted by Willa at 11:47 AM No comments: 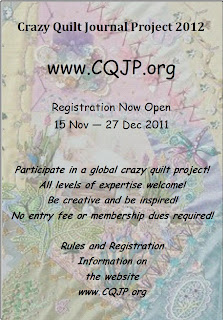 Hey Crazy Quilters, This project led by Kathy Shaw is similar to the Quilt Journal Pages and Bead Journal projects except it will involve crazy quilt blocks of at least 6 inches square! They can be larger, but not smaller and they can be shapes other than square, such as rectangular. Please read the website for the rules. The website is http://www.cqjp.org/ Project must be started in November. This is a good way to rev up your cq engines!!!

Participants should submit their registration information via email to Chairperson@cqjp.org to become a participant in the Project. Spread the word!! Let's flood the world with new crazy quilts!!
Posted by Willa at 7:45 PM 1 comment: 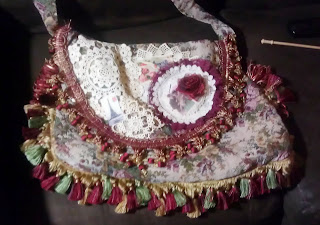 I have been following a couple of my internet friends who make these really awesome boho bags. I have a lot of upholstery remnants and scraps of trim so I decided to give it a shot. Incidently, my friend Stacy and I took a quick visit to Calico Corners ( a home dec fabric store) and low and behold they had all these scraps for a dollar a bag. There is exactly 3 dollars worth of trim on this purse and the fabric is a large remnant that was given to me by a decorator whose store was leaked upon by the 2004 hurricanes here in Florida. The fabric was fine but he couldn't sell it if it was wet at all so he just had me back my car up filled up the hatchback. The doilies are from my stash.. I pick them up here and there. Even the lining is a decorator remnant. The rose from from an estate sale. I want to make more of these. This one will go to an auction for a breast cancer fund raiser.

I made these bags for a scholarship auction for a conference I will be attending. One is made of a new pair of jeans and the other is knitted with a variety of yarns from my stash. The jeans tote is lined with the same fabric as in the "sash" and the knot tote is lined with stretch velvet ( stabilised with fusible woven interfacing. ) 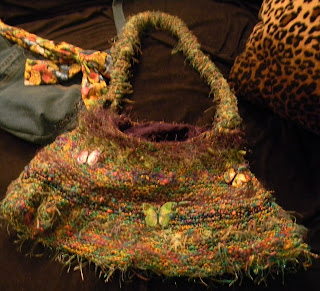